A 1-year-old girl is back at home in Nebraska after receiving lifesaving treatment in Colorado, including a surgery with magnets that helped connect a large gap in her esophagus.

Harper and her fraternal twin sister, Gabriella, were born prematurely on Feb. 22, 2021, at 23 weeks. The newborns were delivered by emergency cesarean section at Box Butte General Hospital in Alliance, Nebraska, and were immediately flown to HCA Healthcare’s Rocky Mountain Hospital for Children in Denver, about 250 miles southwest, for treatment.

When Harper arrived at Rocky Mountain, she was diagnosed with long-gap esophageal atresia and pulmonary hypertension, or high blood pressure in the lungs. 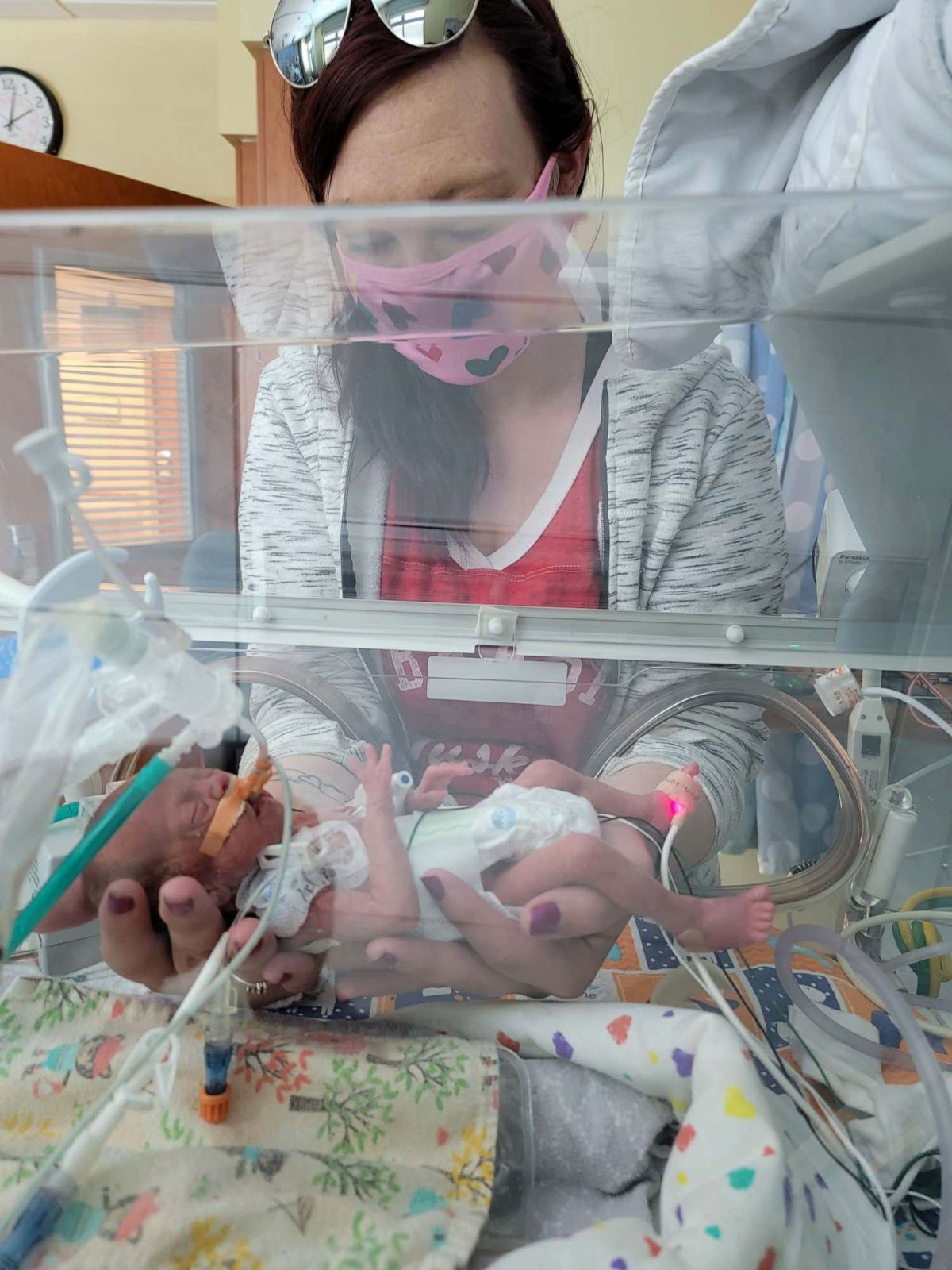 Harper was born at 23 weeks on Feb. 22, 2021 in Nebraska and later, had to be transferred for further treatment at Rocky Mountain Hospital for Children in Denver, Colorado.

According to the CDC, esophageal atresia is a birth defect, and there are four types of it: types A through D. Harper had what is referred to as Type A, where her upper and lower esophagus were not connected to each other, all of which made it unable for her to eat, drink and swallow through the mouth.

Dr. Steven Rothenberg, chief of pediatric surgery at Rocky Mountain Hospital for Children, started consulting on Harper’s case shortly after she arrived at the hospital. Looking back, he said he would have given her a 1% to 2% chance of survival.

Rothenberg said Harper had a gap that was about two-thirds the size of her chest, or about 3.5 inches.

Harper’s care team told her parents, Kayla Hatch and Victor Jacobo, that they needed to wait until Harper grew a little more before surgery was even an option.

“One of the main things I remember from every doctor that was taking care of [Harper and Gabriella] was, you know, ‘Sit tight. It’s gonna be a long road — and it sure was,'” Jacobo recalled.

Gabriella was also treated at Rocky Mountain for complications due to prematurity but didn’t have esophageal atresia like her twin.

Among Harper’s multiple surgeries were the three she underwent for her esophagus. She had her final esophagus repair surgery with the small magnets on Jan. 20.

“It was that final bit that we needed. And then … if you leave the magnets in place, they sort of fuse the tissue and make a communication, and that worked in her, and so we were able to avoid the third operative procedure of going back into her chest. The magnets did the final work for us, and then after a week we pulled the magnets down.”

Rothenberg noted that the use of magnets is especially interesting since they’re often associated as a danger for children.

“One of the worst things we ever see are kids who actually swallow magnets. The magnets get down into their intestine and … the kids can get very sick and die. So, something that has caused a huge amount of problems and requires many operations in many kids may actually have a medical use to do something more positive.” 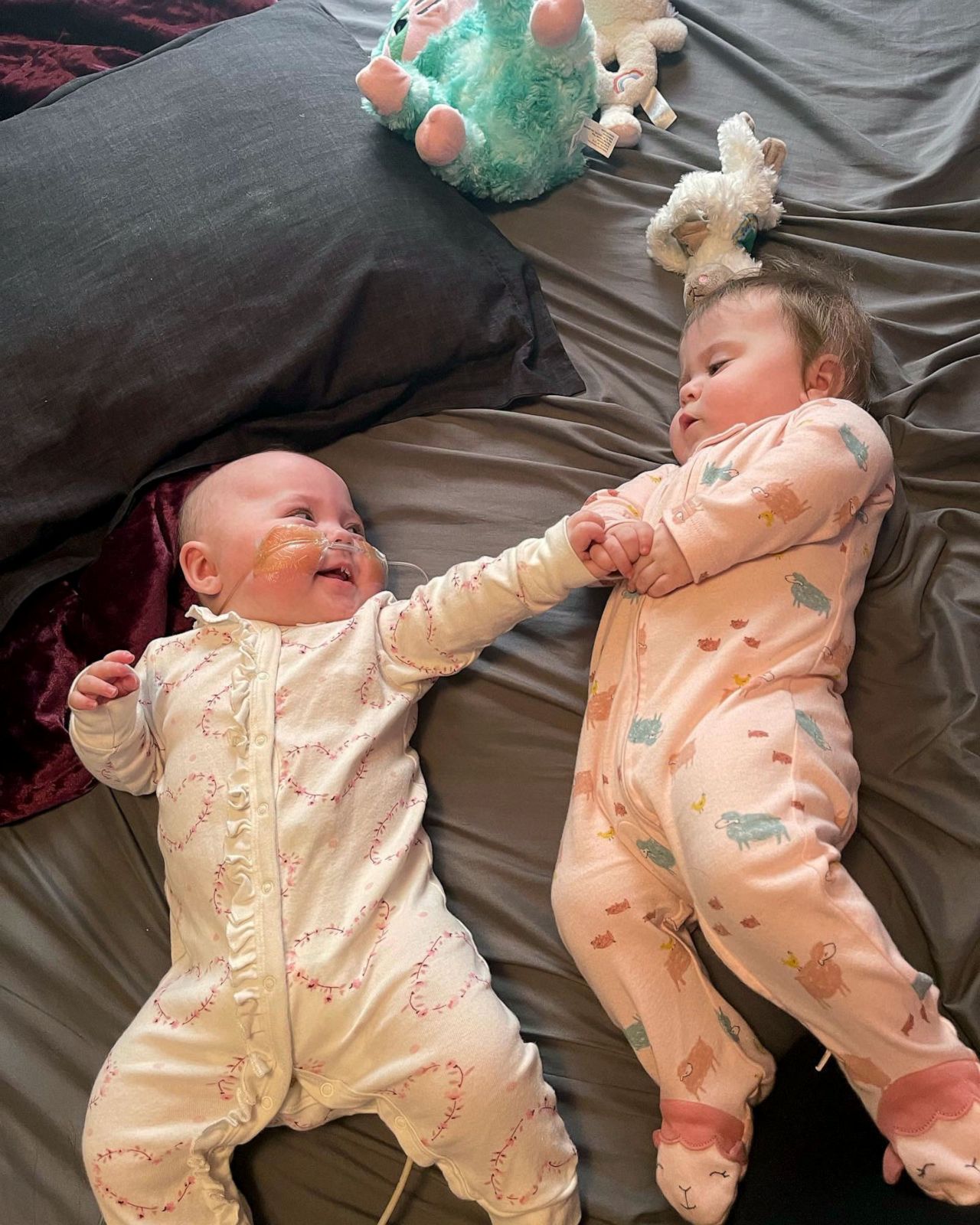 Harper with her twin sister, Gabriella.

By March 9, Harper had recovered and was healthy enough to be discharged from Rocky Mountain’s pediatric ICU over a year after she was admitted. Harper will continue with follow-up treatments and will have to learn how to eat, but Rothenberg said he’s confident about her prognosis.

“The fact that she’s made it home and they’re all together is really a miracle,” Rothenberg said, adding that a large team of nurses, respiratory therapists and ICU doctors all had a hand in caring for Harper and her twin sister.

MORE: The changes in preemie care that may have helped the world’s smallest babies survive

Harper and Gabriella are now reunited at home, along with their three older sisters and parents.

“For the life that she’s had and everything she’s been through so far, she’s just happy,” Hatch said of Harper.

Hatch and Jacobo said they’re grateful for all the support they’ve received from their families and community as they’ve navigated through the ups and downs of Harper and Gabriella’s long journey home and want their youngest kids to know they fought for them every step of the way.

“I would go to the ends of the Earth for them. I never ever could have even imagined giving up on them or not making sure that every possible thing was done to try to save them,” Hatch said. “We love them so much, and we could not imagine life or our family without them.”

“I just want to tell them when they’re older and they do look back at this, to remember what they’ve gone through, that nothing in this life is impossible. They’ve beaten the odds once, and they can do it again,” Jacobo said. The Electoral Commission of South Africa (IEC) is a permanent body created by the Constitution to manage free and fair elections at all levels of government.

The Electoral Commission of South Africa (IEC) is a permanent body created by the Constitution to manage free and fair elections at all levels of government.